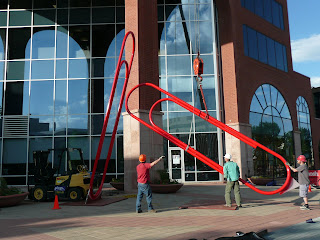 Wow--leave town for a week and a giant landmark arrives! After arriving back from the Americans for the Arts convention in Seattle, I was delighted to discover Chris Weed's newest piece of large-scale public art in front of our office. Friday night at the opening reception for Art on the Streets Chris won first prize! Congratulations to him. We're thrilled to have such an eye-catching and playful piece in front of our office and doubly thrilled that it's by a local artist. Go, Chris. It's been a ball to watch the passersby gawk and the children climb all over the work. The paper clips have also resulted in a dramatic increase in traffic into our office (see the little door - that's COPPeR- come visit us!), so I have been woefully neglectful in writing in this little blog. Hi, readers, nice to see you.
So, Seattle. This was my second year attending the Americans for the Arts annual convention, and I was pretty excited about its location (the convention is in a different city each year; last year was Philadelphia, next year will be Baltimore) because my mother and one of my best friends live there. I was also excited because this convention provides such great opportunities to connect to my colleagues at local arts agencies around the country in a truly meaningful way. This year the Pikes Peak region had four representatives--in addition to me, the fabulous Susan Edmondson of the Bee Vradenburg Foundation and COPPeR board member was there, along with my dear friend (and PeakRadar's Kevin Johnson's fiancee) Amber Cote, executive director of FutureSelf, and Wendy Mike, former executive director and founder of FutureSelf and creativity champ. It was great to have such strong representation from our community-- and I think it's a real sign that our arts community is growing up.
I arrived in Seattle and my mom picked up from the airport. We decided to have a late dinner before she took me to the hotel (thanks to Amber for letting me crash in her room. I would have stayed at mom's but she lives in West Seattle and commuting would have taken away valuable networking time). I have a thing for grocery stores, especially Asian grocery stores, so we went to Uwajimaya.
After yummy sushi and a bahn mi, Mom dropped me at the hotel and headed home. Sidenote: my mother is a working artist and she lives in the coolest place ever -- the remodeled and repurposed Cooper School, which has been converted into an arts center complete with affordable housing for artists, part of the Youngstown Cultural Arts Center. More about that in a later entry.

The conference kicked off with a lively plenary by Bill Ivey, in which we got a behinds-the-scene glimpse at what life in DC was like during the presidential transition. Bill Ivey was chair of the National Endowment for the Arts during President Clinton's administration, and he was also part of the transition team and is the author of Arts, Inc. . One of the most important pieces of advocacy Americans for the Arts completed last year was lobbying to have every single presidential candidate form an official arts policy. I remember hearing about this at last year's conference--it ended up taking on a much bigger scope when Obama was elected, since his was among the strongest arts policies. Here's an interview with Mr. Ivey at the conference in Seattle, courtesy of ArtsJournal.

More coming soon. Just wanted to give you a teaser!
Posted by Bettina at 3:11 PM