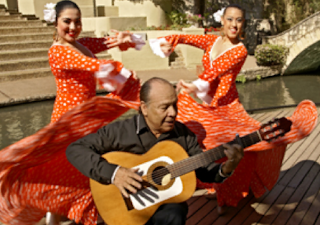 After our meeting with the San Antonio Chamber, our group took a brief jaunt over to the Alamo (the building was smaller than I expected; the grounds much more magnificent than I could have dreamed). Then Dave Csintyan from the Colorado Springs Chamber took me and Angela Joslyn from Senator Michael Bennet's office in Colorado Springson a tour through the Riverwalk. It was about 90 degrees and quite humid, but down on the riverwalk it was cool. We wandered past the many restaurants, mariachi bands, and hotels. It is a vital and bustling tourist destination, and Dave, a former resident of San Antonio for many years, assured me that the locals spend time there as well. I would like very much to go back and spend some more time there, specifically to see Fiesta Noche del rio, the longest running outdoor performance series in the country, at the Arneson outdoor amphitheater.

We headed back to Austin, and I collected my bags from the AT&T hotel up by UT-Austin and headed downtown to the Radisson (My contact at the Cultural Arts division, Vincent, kindly arranged a very reasonable rate for my last night in town). I checked in and then headed toward the 2nd street district, to Cru wine bar to meet my cousin Jessie. Jessie and I hadn't seen each other for more than ten years, but we reconnected instantly. She just completed her first year as an assistant professor at Western Carolina University, but has lived in Austin since the mid-1990s. She is a historian with a keen interest in urban and suburban history, so she had lots to say about Austin's development, particularly with regard to how the housing boom had affected many of her friends. Her husband, for example, bought a loft in 2004 and is now trying to sell it at nearly three times what he paid for it. House-flipping was common and the incredible swell in real estate values caused radical gentrification and pushed families out as wealthy young workers moved in. After only hearing about the positive aspects of economic development, it was refreshing to hear about the real-world impact on Austinites and their families.
Jessie had dinner plans, so I headed back to the hotel to get a better view of the bats at dusk. The hotel is on the river, so I stepped through the pool area, and headed down the hill. On this second night at the bridge, I saw more bats--the Congress bridge colony is estimated at 1.5 million Mexican free-tail bats. Each night during the spring and summer, the bats emerge at dusk, and the spectacle has become an extremely popular tourist attraction.
On my own for the evening, I began wandering up toward 6th street. The weekend was in that strange in-between-time of post-regular performing arts season, pre-summer season, so I couldn't catch a formal event. I wasn't worried, though--one of my favorite things to do in unfamiliar cities is to wander around and see where I end up.
As I walked among the crowds of people heading uptown from the bat bridge, I happened to overhear a gentleman pointing out various landmarks and telling funny stories about Austin architecture. I boldly stepped up and asked if I could join their tour. "Why, sure!" said one. "Where are you from?"
When I told them I was visiting from Colorado Springs, they were astonished. It turns out that two of the guys in the group, Jim and Mark, graduated from Mitchell High School in the 1980s. Jim had been living in Austin since then, and Mark was visiting from New Hampshire. They hadn't seen each other in about ten years. With our 719-connection established, they kindly let me follow them around on their night on the town. Jim knew many of the business-owners on 6th Street. We ate dinner at a Vietnamese restaurant, visited a bar called Maggie Mae's where a friend of Jim's had some photorealistic oil paintings of local music legends hanging on the wall. Jim moved to Austin because of the nanotechnology boom (he does something that has to do with semiconductors, I must confess, the details were beyond me). After a brief stop at Lovejoy's, a very punk rock sort of place where they brew their own beer, we headed to Emo's, the legendary rock club. Jim knew the property owner, so we got in for free and caught the Detroit Cobras, a great lo-fi rock'n'roll soul band. On the way out, we stopped at Best Wurst, a fabulous street vendor, then said goodnight.

My new friend is in Colorado this week for Apogaea, the Colorado arts and outdoor festival, put on by Burning Man. I promised to show him around when he returns from camping--here's hoping I can return the favor and get him some behind-the-scenes access! 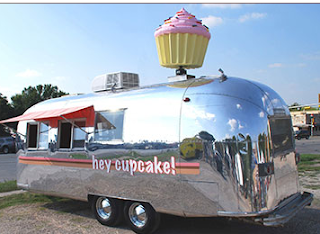 The next day I went on a long walk on the river path and met up with Jessie again. We had a leisurely lunch at Enoteca, a charming restaurant on South Congress. The South Congress neighborhood is a hip revitalized area with quirky shops, restaurants and a parking lot filled with retro airstream trailers converted to food vendors, including the original "Hey Cupcake."

We poked around in Uncommon Objects, a thrift store/antique shop crammed full of strange and delightful curios, then stopped at the outdoor street market, where local artisans sell their wares. One of the merchants stopped me to compliment me on my watch and then recommended a pair of hand-carved wooden earrings. I have a bit of an earring habit, so I happily obliged. We walked the whole stretch of South Congress in about an hour, stopping in boutiques and peeking in the glamorous hotels that have become destinations for film industry folks.

Just a few years ago, the entire South Congress area was, to say the least, seedy, with a reputation revolving around prostitution and drugs. A strategic initiative to redevelop the neighborhood resulted in the South Congress Combined Neighborhood plan. In the commercial guidelines, one of the first instructions is "Keep It Funky."

The urban design guidelines for South Congress Avenue set out to create a
distinctive district with a “funky, Austin-centric” feel. This development should not be a replication of other areas of Austin; rather, a new expression of the energy, culture, and individuality embodied in the slogan: “Keep Austin Weird”.

It's a very cool neighborhood.


With just a couple of hours before my flight, we headed down to the shops at 6th and Lamar, where the first Whole Foods began. Now an 80,000-square feet museum of a grocery store, it's a destination all in itself. Jessie bid me goodbye, and after I drooled over the foodstuffs (but miraculously did not buy anything!), I headed across the street to Book People, one of the largest independent bookstores in the country 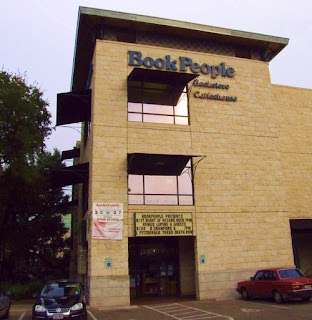 . I spent two hours happy as a clam (a painful reminder of how much I miss the Chinook bookstore and Hathaways), bought the new John Hodgman book, then phoned for a taxi.
My cabdriver arrived, apologizing that he had his sister along with him, but explained that she was visiting and he wanted to show around. I asked where she was visiting from and was delighted to hear that she was visiting from Paris. We quickly discovered that they had grown up in in the same neighborhood I stayed in on my trip to France two years ago. The siblings had not seen each other for several years. The last time they had seen each other they had gone on vacation in.....wait for it...Southern Colorado! They reminisced about skiing at Monarch and going to art galleries in Salida. We had a lovely time chatting and they tolerated my very poor French. I was sad to get to the airport.

I neglected to mention this so far, but since I was representing all you groovy artists and musicians out who call the Pikes Peak Region home, I gave a copy of our local music compilation, Sounds of the Pikes Peak Region, to each one of the fine speakers who met with our group. Austin may be the live music capital of the world, but we have some incredibly talented people here as well, and I was pleased to be an ambassador.

The entire visit left me (and all the participants) with much to think about. The biggest takeaway for me was that successful community-planning depends upon a delicate balance between careful planning and long-term vision and valuing the characteristics that make a place unique and authentic. We need to figure out who we are -- then be the best we we can!

I also feel very confident that the community arts development, the work we at COPPeR are engaging in on a daily basis, is putting us on the right path. Of course there are many components of a successful city, but the arts help us tell the story of what makes us human. Right here in COPPeR's brochure, we have a list that answers the question, "Why the arts?" It's simple:
Thanks for reading.
Posted by Bettina at 3:32 PM

awesome bettina. reading your entry was like being there!