The Best in Public Art from Around the Nation

I've got public art on the brain these days. Sitting at my desk in downtown Colorado Springs, I have a fantastic view of several pieces of public art, including Chris Weed's new paperclips, two butterflies and the bronze sculpture of William Seymour by Stephanie Huerta at the bench where the downtown shuttle stop used to be (sigh...).

One of the most enjoyable sessions at the conference in Seattle was the public art year in review. Jurors Janet Echelman and Mildred Howard selected 40 of the best public art works in the United States, including projects from 32 cities in 15 states. The works were chosen from more than 300 entries across the country.

All of the projects were stunning, but here are just three of my favorites:

Language of the Birds in San Francisco, CA at Broadway and Columbus (in front of the legendary City Lights bookstore) by Brian Goggin and Dorka Keen. It is the first permanent solar-powered public art piece in the United States. Note that the sculptures are suspended books with solar panels, that, when illuminated, look like birds. Here's a video of the installation.

Language of the Birds from Thomas Both on Vimeo.

The second project is in the Jacksonville, Florida airport. Called simply "Gotta Go," this piece by Gordon Heuther is a breath of fresh air for weary travelers. Bob Lynch, head of Americans for the Arts, told a story about being in the airport looking at the piece when someone came up next to him. They started talking about the work and the person said, "This is really beautiful. Is it art?" 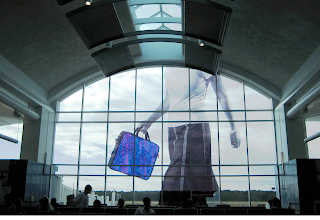 The third is Raine Bedsole's Remembering Boat in New Orleans. The piece is a memorial to the victims of Hurricane Katrina. It features a poem by Tony Fitzpatrick
water has nothing to do with luck
and everything to do with chance
water is the music of consequence
the water is hungry... the water wants 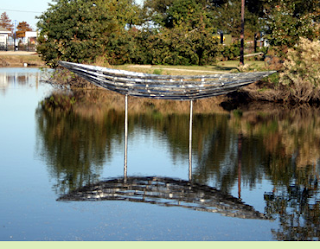 These are just three of the 40 projects we got to see. I like these three because they show the real range of public art. It can be evocative, representational, symbolic, a statement of memory or whimsical. But it always starts a conversation.
Posted by Bettina at 9:08 AM

Labels: Americans for the Arts