Promptly at 8 a.m. on Thursday, we dove into our first session with Dave Porter, Vice-President of Economic Development at the Austin Chamber. In many communities, Economic Development and the Chamber of Commerce are merged, creating one umbrella group responsible for retaining and cultivating existing businesses while simultaneously seeking out new businesses and industry. In Colorado Springs, the Chamber and the EDC are separate organizations (they were once aligned, but split in the early 1990s). Dave spoke about the importance of attracting and incubating small businesses in the high-tech field. Because UT-Austin is such a fantastic training ground for highly-educated, skilled workers, businesses began to move there, knowing they would have a rich pool of talent from which to pick their workers.

Austin's story began to unfold as we met with Downtown developers and Lee Cook, the former Mayor of Austin. In the 1980s, Austin was in the midst of a huge recession. During the Savings and Loan crisis, more than 30 local banks closed (out of about 750 that failed nationwide). Real estate plummeted, and the future of the capitol city was uncertain. Austin had been "branded" the Manufacturing capital of Texas in the early part of the 20th century. Local leaders realized they had to shake off that mantle and move forward with a more clear and compelling direction in order to compete.

You may have seen the bumper sticker campaign: "Keep Austin Weird" (Manitou Springs has also adopted this slogan). The slogan was generated by the Austin Independent Business Association and is a perfect example of how Austin takes pride in being quirky, independent and visionary. Over and over, the people we met with kept invoking this indescribable Austin creativity and sense of pride.

Just one example of this--Austin is known as the Live Music Capital of the World. Most people know that. But what you don't know is how that came to be. Former Mayor Lee Cook told us the story about Max Nofziger, a flower City Councilman. From his bio:

Max's love of the city prompted him to become involved in the political process. He felt that he could legitimately and effectively work to keep Austin environmentally and culturally unique.

In 1979 Max made his first run for City Council -- Place One, campaigning for a clean environment and against Austin's involvement in the then newly proposed South Texas Nuclear Project. A political new-comer, Max won several thousand votes, but not enough to win. Not to be discouraged, he tried again in 1981 and got even fewer votes! Again not to be discouraged, Max was determined to be a voice in the city he had adopted as his own. 1983 saw "Max for Mayor" this time getting enough votes to force his contenders into a run-off. Another run for mayor in 1985, another run-off, this time he endorsed the eventual winner. Finally, on his fifth try for elective office Max won Place One on the City Council in 1987, edging out a well funded opponent in a very tight run-off race!

He went on to serve nine years in City Council. As Mayor Cook told the story, Max "Max for Mayor" Nifzger suggested calling Austin the Live Music Capital of the World. Not the live music capital of Texas, or the Southwest, or even the United States. THE WORLD.

That, folks, takes guts. And leadership.

Later that afternoon, we hea 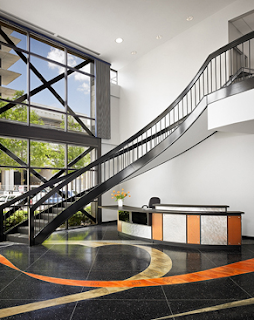 ded down to Ballet Austin (that's the lobby of this to-die-for facility with acres of sprung floors and a modular performance theater with moveable seats that, when removed, reveal a floor the exact dimensions of the stage of the Long Center, where the company performs).
We met with Vincent Kitch, head of the Cultural Arts Division at the City of Austin. Vincent was kind enough to agree to give a presentation to a group of people he'd never met coordinated by a woman he'd never met (me). But all of the new connections I made in Austin were easy--I picked up the phone and called people and they agreed to meet with me. The arts community is like that, I suppose--just one more reason I feel so fortunate to work in this field. Also, just another reason why having a Cultural Office in a community is so essential; our peer network gets us access.

I gave a bit of a background on COPPeR and how we were founded, and then Vincent talked about what his office does. Most U.S. cities have cultural offices embedded in their local government (as a nonprofit partnering with the City, COPPeR is different). Austin's department of cultural affairs is under the Economic Growth and Redevelopment Services branch of Austin city government, and it's easy to see why. Just a few quick facts:
That is a huge chunk of revenue. Vincent explained that the Cultural Arts division grants millions of dollars to local arts organizations and individual artists. While I wiped the drool from my chin and attempted to collect my jaw from the floor, he told us more about how this all came about.

In 1985, a 2% tax for the arts was approved by voters. The money comes out of hotel/motel tax, and results in all the funding. Vincent's division now has 9 employees and the majority of the work they do is regranting to arts groups and artists. Austin just recently completed a Cultural Planning Process, called Create Austin. All the figures above came from that process. You can read the plan and see how they are implementing it here. 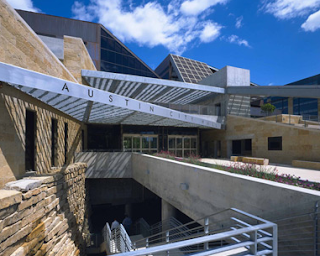 After this extremely educational session, a few of us wandered over to City Hall. This might look familiar to Pikes Peak regionettes, since it was designed by Antoine Predock, who also designed Colorado College's new Cornerstone Arts Center.


City Hall is a perfect example of Austin's purposeful integration of arts and civic life--this gorgeous building is also one of Austin's most important art galleries. City Hall showcases the talents of local artists with an extensive annual art exhibition in the atrium and open areas of the first three floors. Approximately 150 contemporary artworks are on display, including paintings, photographs, sculptures and other mediums. Upon entering the building and going through the metal detector, we picked up a 24-page booklet guiding us through the pieces of art. It is breathtaking.

The bottom line: Austin took a time of scarcity and true hardship and harnessed creativity to cultivate a thriving arts and music destination city as well as a center for emerging technology. They consistently take the long view and continually search for ways to learn from other successful communities. They listen to their leaders, they communicate, and above all, they COLLABORATE.

Coming soon in Part III: more leaders dish, going green, and I hit the town with some locals.
Posted by Bettina at 12:32 PM

Nice blog entry. Thanks for sharing your experiences. I sure wish more Colorado Springs leaders would play follow-the-city-leader of those cities that have a nice focus on all things artsy.

An excellent story about how Vincent Kitch reorganized the Cultural Arts division in the City. Worth reading also to see how their arts community is not without controversy.