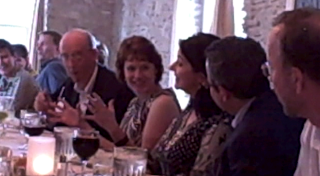 Thursday evening wrapped up with a huge group dinner at Carmelo's. Everyone was in high spirits, and Dave Csintyan, head of the Chamber, gave a toast, ending with, "and no one else can give a toast unless they do so in the form of a limerick." Kevin Reel, headmaster of the Colorado Springs School, stood up to the challenge. Unfortunately I can't recreate his spontaneous poetry from memory, but, inspired, the group then decided to go around the table and create a new poem using rhyming couplets. As you can imagine, this resulted in much hilarity and merriment.

After dinner the honorable Mayor of Manitou Eric Drummond took us down to the Congress Avenue bridge to see the bats come out at dusk. A group of people headed off to the Broken Spoke to do some two-stepping, but I decided to stay on 6th Street with a small group. We wandered into an Irish pub with a blues band playing. The very talented guitar player, Ulrich, from Germany, had just received his Masters in music from UT-Austin. Yet another connection between the university and the lively cultural scene...

Next morning, we had breakfast with Pike Powers (or, he joked, as he is frequently introduced to people, "Austin Powers"). In 1983 Pike began the planning and organizational tactics for attracting two of the nation's most ambitious projects around global competitiveness in electronics and is widely viewed as one of the senior voices on technology development and as the designer of important legislative and public policy solutions resulting in new enterprise and corporate models for attracting and retaining technology-based activities. If that description sounded complex and jargon-y, Pike himself is the opposite of that. He has frequently been quoted in Richard Florida's work and is a spokesperson for why the City of Austin has become successful.

His lesson? All his accomplishments stood on the legs of what Florida calls the "Three Ts:" Tolerance, Technology, and Talent. Listen to each other, widen the conversation, be respectful. One of the most powerful stories he told was about how he invited young people to join the conversation about 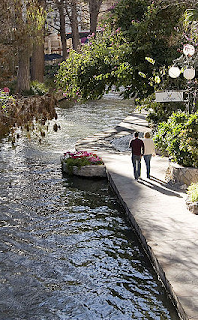 economic redevelopment. He talked about the importance of understanding people's differences and making sure you are genuinely inclusive. He may be coming to Colorado Springs in November--I will keep you posted. He's well worth hearing.

Our group split again, for the last time. My group made the two-hour drive to San Antonio, during which I had a lively conversation with El Paso County Attorney Bill Louis and Angela Joslyn with Senator Michael Bennet's Colorado Springs Office. We discussed Law school, children's creativity, playground equipment and more. We arrived in San Antonio at the Chamber of Commerce, located right on the Riverwalk. Upon walking in, we saw local contemporary artwork all over all the walls. The Chamber has monthly rotating art exhibits, all featuring local artists.

Representatives from the Chamber, including Chair-elect Carri Baker Wells, and staff Bill Mock and Mark Frye, discussed how they are leveraging San Antonio as an economic center for health technology. Ann Stevens, the President of BioMedSA, a new initiative to promote the local healthcare and bioscience industry and its importance to the local economy. She talked about the medical community's unifying moments--hospitals would fight against each other for patients, doctors, and funding, but when it came to raising the entire industry's profile, their leaders came together, realizing that they needed to do this as a sector.

We also discussed how industry drives job creation and growth. If competitive industries exist in a region, they can serve as an incentive for young people to stay. Congruently, if there are skilled workers in a region, they can convince a business or industry to stick around. This got me thinking: I believe that the only way the creative sector is going to survive is if we can promote ourselves as a viable, productive sector of the economy. Every business leader I know talks about industries as having clear definitions of different industry sectors (Military, health care, nanotechnology, etc.) A recent study by the Colorado Council on the Arts points out that creative industry makes up the 5th largest sector of the Colorado economy. We are big. We matter. So every lesson I try to learn from Business leaders is how to translate those lessons into the work we do.

We can have a touchy-feely feeling of community here in our arts community all we want (and in fact should have a supportive, nurturing environment to bolster our creative spirits), but the fact remains that if there is no infrastructure to support our artists--no market for artists selling their work, no institutions of higher learning offering them superior advanced degree programs, no museums, galleries, or performing arts facilities for our creative people in which to do their work, it is all for naught.

told us about a project they had been working on called Pathway to a Great City. Please note: the their informational brochure prominently features an enormous piece of public art (Mexican artist Sebastian's The Torch of Friendship (La Antorcha dela Amistad). This document makes a series of recommendations to the City for what it will take to move San Antonio from a good city to a great city. Among their recommendations:


Food for thought? Perhaps the work ordinary citizens are doing to create a long-term vision for our community through Dream City: Vision 2020 can be harnessed into something similar.

Coming soon: Final thoughts and a night on the town.
Posted by Bettina at 12:13 PM

It sounds like Bettina and company had a truly inspiring visit to a smartly evolved community. While I agree that a thriving infrastructure is a powerful tool to support the visual and performing arts and that we are sorely lacking on this front, time, context and circumstance have made this, in my opinion, a secondary concern.

The year: 2009—interest in the living arts has been largely superseded by the “home technological womb” – choices for time and money spent have “mutated” in the past decade. Trying to convince the uninitiated that it is worth it for them to leave their homes for a dance, theatre, music performance or art opening is a ridiculously tough undertaking—regardless of how much media or net covererage put out there.

The place: Colorado Springs—a city I’ve always described as at least 5 different towns that happen to be under one roof. There is a lack of a critical mass of an existing art going public as we who do leave our homes have found out—we see the same faces at almost every event. A tough job—people didn’t come here (we are populated by probably 80% imports) for the arts- perhaps they came for a job, the nature or to raise their family. Hence- the truly huge job we must undertake…

A solution? No, it’s not new buildings or support mechanisms or educational beachheads… We have to work with the hand we have been dealt. That means we have to turn our community-complacent potential audience into arts lovers and appreciators… the arts have to go to them. They have to have an undeniably potent and entertaining experience that speaks to them where they are at—not where we would like them to be. That means funding to put the arts on the road to malls, parks, schools, community centers, etc. and most importantly—beautifully written presentations that make it easy for the tubed-out generation to really get it—perhaps for the first time in their lives—to experience the glory of the living arts… something we know to be a far greater payoff than anything they could catch on network television, online or by being tied to a control unit.

In the final analysis – it’s about good ol’ supply and demand. We have a fine and ready supply of arts—we just have to create a demand for our product. That has to happen inside people’s hearts and minds. We are not Austin… we don’t have the same kind of population and most importantly, we missed our chance to build this in our city before the onslaught of such seductive and enjoyable toys for the home.

David, in many ways I agree with your assessment. However, I disagree very much that we see the same faces at every event. That may have been true five years ago (and may still be true within some disciplines) but if you venture out tonight for First Friday or stop by one of the dozens of the free outdoor concerts this summer, you will see a plethora of unfamiliar faces. I believe that in this time of economic uncertainty, people are re-evaluating the ways in which they spend their time and the activities they enjoy with their families. Arts experiences provide more meaning and connect people to their community. There is a hunger for the arts. No, we are not Austin, but we have a vital arts community. It is a strength that has been ignored by civic leaders for too long, but we are finally beginning to have an impact.

Point well taken Bettina-- It's true that I don't get around as much as I used to and I tend to be at classical music and dance concerts when I do... so I probably am not seeing the shift. That's good news - although I am mostly advocating for the installing of appreciation, involvement and attendance of more "fine art" forms. It is an wonderful arts community we have and remains largely unknown-- here at home and throughout Colorado (hence the lack of interest generated by the CS Phil's amazing Mahler 9 last weekend and the Opera Theatre's stunnig production of Street Scene this past March) We just need it all-- great marketing, enhanced infrastructure and new ways to turn observers into advocates.

Thanks to PeakRadar, the marketing has already turned a corner.