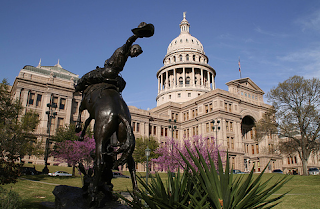 Several months ago I heard about a strategic planning mission coordinated by the folks at the Greater Colorado Springs Chamber of Commerce (with whom COPPeR co-hosts an annual award luncheon honoring businesses that support the arts) to try to figure out why Austin left us in the dust in terms of economic development 20 years ago. Two decades ago, Austin and Colorado Springs were competing neck-and-neck for businesses and high-tech industries. Now, Austin boasts a population of 1.7 million people, a thriving nanotechnology industry, a world-class research and teaching university, and of course, it is the live music capital of the world.

The Southern Colorado Innovation Strategy Leadership Trip to Austin, coordinated by the Chamber and UCCS, took place last week and I was extremely honored to be among the attendees, representing the arts and cultural community in the Pikes Peak region. Elected officials City Councilwoman Jan Martin and County Commissioner Sallie Clark and Manitou Springs Mayor Eric Drummond were there, as was Pam Shockley-Zalabak, chancellor at UCCS. About 30 movers, shakers and leaders in the business and education world from Colorado Springs, Manitou and Pueblo went on the trip. My job was to connect the dots between a quirky, authentic and vital arts and cultural community and a thriving economy. I quickly got to work connecting with my counterparts in Austin cultural services coordinating meetings and sessions so all the attendees could see firsthand why a vibrant arts scene is essential to economic and community development.

I flew out a bit early on Wednesday morning so that I could do some reconnaissance around town before the rest of the delegation arrived. It may betray my hipster pedigree to admit this, but I had never been to Austin before last week. I stepped off the plane and immediately noticed the placard in the jetway ("Welcome to Austin," it said, "the live music capital of the world."). I flagged a taxi, got a basic geography lesson from the friendly cabdriver, checked into the AT&T Conference center and hotel up at the UT campus, and then wandered down Congress Ave, past the capitol and in to the heart of downtown.

I found myself at Arthouse, a contemporary art venue. I caught the last week of the very cool local show up right now called 5x 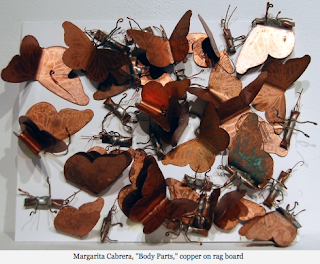 7, in which hundreds of contemporary Texas artists create unique works of art on identical 5” x 7” boards, all displayed anonymously and on sale for extremely reasonable prices. An old family friend, Ben Slade, is working there as membership coordinator and new media coordinator, so he and I chatted about the visual arts scene there. Ben and I both grew up in New Mexico, and after he graduated from college he got a job working at a gallery in Santa Fe. Shortly after, he left to move to Austin. He vastly prefers the authentic arts community in Austin to the glittering commerce-based community in Santa Fe. I also talked to Nathan Green, staff from Okay Mountain, an artist-run gallery space.

Ben and Nathan told me that between the Univerity of Texas art students, the South by Southwest music and film festival kids (Austin is a festival town--it's the #2 major U.S. City in the number of festivals per thousand population), there is creative energy burbling up all over the place. Young artists will start art galleries in their living rooms and host First Friday receptions with bands playing. They both praised the new-ish Fusebox Festival, which focuses on performing arts.

Ben and Nathan had to get back to work, so I left them and trudged around the 2nd St. district, peered in at the Austin Children's Museum (noting that their informational brochure is completely bilingual), and drooled over a couple of very chic design boutiques.

Later that night, we 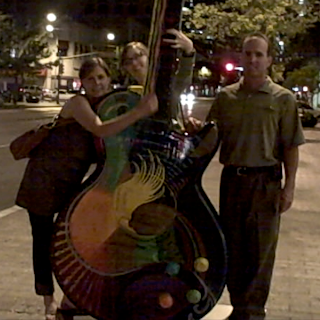 broke off into small groups to enjoy dinner. I took a small group to Moonshine (note: beer-battered asparagus is delicious; I regret not ordering the corndog shrimp) and we met up with some local longtime arts mavens. Rick Hernandez, the immediate past Executive Director of the Texas Commission on the Arts, an organization he was involved with since the mid 1970s as an artist-in-residence. Rick is warm, outgoing, and full of insights about how Austin completely transformed during the 1980s. Latifah Taormina also joined us--she is the executive director of Austin Circle of Theaters, a co-presenter of NowPlayingAustin.com (sister and fellow Artsopolis site like PeakRadar.com). Latifah has a fascinating past--she started the legendary Committee improv troupe in San Francisco. We had a wonderful dinner sharing stories and laughing, then Rick and the rest of our gang set off to see the town. We just missed the solar-powered outdoor concert series in Republic Square (a brand-new initiative to prove that even the music scene is part of the environmentalist movement in Austin), but we cozied into the Elephant Room and heard a great set of jazz. Then the diehards in the group headed up to 6th St., where among the dozens of bars --all featuring live music-- we found Pete's dueling piano bar and laughed our way into the wee hours of the morning. Along the way we played one of the GuitarTown guitars,a public arts project feautring local artists' takes on ten-foot Gibson Guitar sculptures.

I'll continue with Part II tomorrrow, in which we meet with the head of Austin Cultural Affairs (responsible for giving $5 million to arts organizations and individual artists in 2008) and continue the cultural tourism.