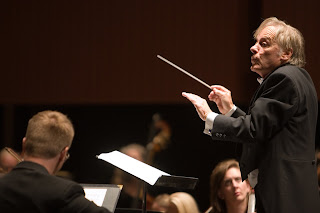 I found out this morning that Lawrence Leighton Smith is leaving the Colorado Springs Philharmonic after next season.

Larry's leadership has been incredible for this orchestra and this community. His loyalty to the musicians, especially during the very turbulent past few years, has been immeasurable. My first introduction to Larry came when I was a freelance writer for the Colorado Springs Independent. I was hired to do classical reviews and previews. Not only did Larry always take my calls, he and I would frequently engage in lengthy philosophical conversations about composers. He has done so much for this orchestra.

But then, we get to see Mahler 9 this weekend, and we have all next season to appreciate him!

Lawrence Leighton Smith will hand off the baton after 11 years as music director of the Colorado Springs Philharmonic and its predecessor, the Colorado Springs Symphony Orchestra. Smith announced his decision at a rehearsal for Mahler’s Symphony No. 9 on Wednesday night.
“I feel it’s time for something different for everybody,” said Smith, who has led
the Springs’ only professional orchestra since 2000. “In the professional arena, this is my longest stay anyplace.”
“Larry is giving us two years notice,” said Nathan Newbrough, the Philharmonic’s president. “And that’s great, because the shoes he leaves us to fill are enormous.”
“He’s been the perfect person for this orchestra,” said concertmaster Michael
Hanson. “He’s the experienced musician and steady person we needed to take us through turbulent times.”
The most turbulent time of all was the bankruptcy of the Colorado Springs
Symphony Orchestra in January 2003. Smith’s announcement that he would stand by the musicians was a major impetus behind the decision to form the Colorado Springs Philharmonic that spring.
Now that Smith feels the orchestra is ready for a different pair of hands, the task
begins for Newbrough and others to find Smith’s replacement.
“The search is a long and thoughtful process that’s extremely rewarding for the
orchestra and the community,” said Newbrough. “Right now we’re in the process of
assembling a group of musicians and community representatives to commence the search process.”
“A conductor search is an exciting opportunity for an orchestra to find out about
itself,” said Hanson. “It’s a marriage of personalities. Each new person brings something different, and the orchestra responds differently and sounds different for everyone.”
Smith plans to take some time off come the summer of 2011 – but not too much
time off. “I have some guest-conducting coming up,” he said. “I have a lot of composing on my plate. As long as I hang on to my marbles, there’s no lack of things to do.”
Asked about highlights of his music-making in Colorado Springs, Smith
mentioned the 2006 performance of Mahler’s Symphony No. 5 and the 2007 performance of Dvorák’s Symphony No. 6 as two that stood out.
“But I’m not leaving for two years,” he said. “There are some highlights I don’t
know about yet.”

Although I never had a chance to hear, in person, his work... I did enjoy his many TV shorts on the local cable channel where he would talk with performing artists and share some musical numbers too.

News Blab 2009 - Never fear, next season will be his last. You can still see him conduct all next season at the Pikes Peak Center: http://www.csphilharmonic.org

Actually, Larry will be continue as music director of the CS Phil through the 2010-2011 season. I expect (and hope!) that he will continue to make guest appearances for many years to come... he is very special