US Air Force Academy to Downgrade Band - consequences for our community 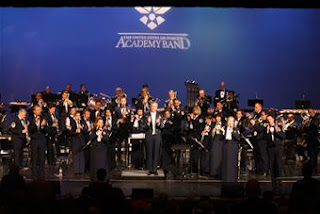 From COPPeR Board member Mark Dempsey, Executive Director of the Colorado Springs Chorale:

The Air Force has made the determination to downgrade the Air Force Academy Band designation from Premier to Regional while retaining the Band’s national touring mission. The downgrade is not just in title and stature but will have a very real impact.
The Band will lose 7-10 musicians and the members will have to rotate through other regional bands every three or four years. The ensemble's current strength is based on playing together as an ensemble over a long period of years. They will no longer have as much ability to audition musicians, but will have to consider candidates rotating through the re-assignment pool. In addition, this will leave the Air Force Academy as the only service academy whose band is not a premier band and eliminate the only premier band located outside of the East Coast/Washington, D. C. geographical area.

I see this as a tremendous blow to the Academy, the region’s number one tourist attraction, an insult to Colorado Springs and to Colorado more generally, not to mention the hard to calculate impact on the region as a tourist draw. It certainly impacts our efforts to develop the cultural reputation of the area. The Philharmonic will lose the availability of some top musicians, and regional schools and other clinician, teaching and developmental efforts among kids and adults alike now provided by the bandsman will suffer as band members are regular clinicians with the Colorado Springs Youth Symphony Association, Peakharmonic and other youth organizations as well as providing off-duty free clinics in at least six area high schools.

The downgrade will also impact recruiting for the Air Force Academy in competition with the other service academies for top quality cadets and in the long run, has the potential to degrade the quality of Air Force leadership. For comparison purposes, the U.S. Army has four Premier bands, the Navy, two, the Marine Corps one plus a Premier Drum and Bugle Corps, all located on the East Coast.

The only recourse now available to reverse this decision is for individual citizens to contact their political representatives asking them to intervene. I encourage you to contact your elected officials today! (But please keep in mind that cut and paste of my or others’ remarks suggests an organized mass mailing and has less impact than a simple, short call or letter in your own words as an individual concerned citizen.)

El Paso County Treasurer Sandra Damron has made the following plea to her elected officials, as well:

The community’s concern regarding the downgrading of this band from Premiere to Regional is based on several factors:

The reason given (career stagnation and lack of promotion opportunities) is simply not true. Musicians function much as a baseball or football team does: the longer they play together, the better they get. For example, the Stellar Brass, which has had the same personnel for 12 years, is possibly the best brass quintet in the country, military or civilian. As far as promotion opportunities, taking away one of the two Air Force Premiere bands effectively cuts promotion opportunities for all other Air Force musicians in half.

There is no cost savings. In fact, the requirement of adding 45 more AF personnel to the list of those who are transferred regularly will actually increase costs by approximately $1 million annually.

It is my hope, and the hope of many others, that you will be able to convince the AF Chief of Staff that downgrading the AFA Band is unnecessary, and that we will be able to proudly keep this band as “The Best of the Best” in representing the United States Air Force Academy.