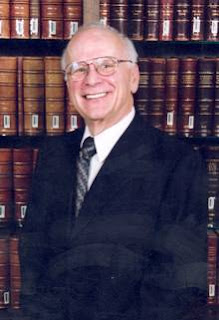 "Calvin Otto, our Pikes Peak Library District Board of Trustees member and champion of literacy, historical preservation, and community engagement, died Monday, November 23. His death is a great loss to our library family and the community that we serve.

For those of you who did not have an opportunity to know Cal personally, here, in brief, are some of the things he did on our behalf:

Cal’s involvement with us spanned nine years, during which time he co-founded All Pikes Peak Reads and the Regional History Symposium, orchestrated the development of the PPLD Foundation, established an endowment to support Special Collections programming in perpetuity, fostered PPLD’s partnerships with UCCS THEATREWORKS and the World Affairs Council, and worked tirelessly on projects such as the 1905 Carnegie Garden, Fountain Branch Project, and others.

Cal attended every Summer Reading Party during his tenure, never missed an opportunity to represent the Trustees to staff and the public, and treated everyone he encountered in a gracious and genuine way.

Before coming to Colorado Springs, Cal founded the American Ephemera Society, The Virginia Festival of the Book, and served on the Vermont Council of the Humanities, The Virginia Humanities Council, and eventually Colorado Humanities.

A memorial service will be held Friday, December 4 at 2 p.m. at Broadmoor Community Church, 315 Lake Ave. All Pikes Peak Library District facilities will close at 1 p.m. on December 4 to allow staff to attend if they so choose.

If you wish to make memorial dedication, donations to the PPLD Foundation have been requested by the family in lieu of flowers."
Posted by Bettina at 8:25 AM